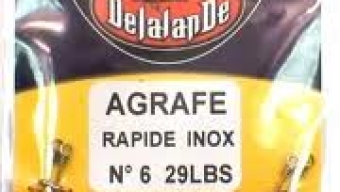 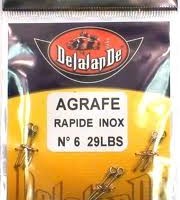 Just thought id give these a mention.

In the past when plugging or spinning i tend to just tie the spinner or plug straight on, which is a bit of a pain. But the problem is everything i have tried clip wise is either too big and bulky or too heavy so that it alters the swimming action of the lure. Even really small snap links can cause a surface lure to want to dive a little.

Obviously the smaller you go in snap links the weaker they are, and i have had them break in the past (its not good watching a prize plug heading to the horizon if you are not still attached to it!!!)

So i was in Gerrys the other week chatting to Darren, when he produced some new clips from a company called Dalalande.

Chris from Gerrys did this quick video for their site and he kindly said i could pinch it….

Give them a try this summer!!
The Delalande Agrafe Clips Currently retail at £3.10 per pack of 6 clips.
http://www.gerrysfishing.com/links-clips-and-split-rings/delalande-agrafe-spin-clips-3944-467-8691.php
So we got onto the subject and Darren also pulled out some other clips, this time from a company called Kipper Enterprises – The no knot Fas-snaps. 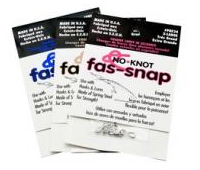 These are made from spring steel, and look REALLY strong, and again they are REALLY light. They are a bit more fiddly to unclip than the Agrafe clips, but in the X large 40lb version they are still tiny clips!!!

Ill be giving them both a go this summer