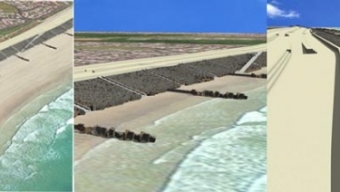 As you are all no doubt already aware, Wyre borough council are planning to devastate the stretch of promenade from Rossall hospital to Rossall point by dumping tonnes of rock armour on the sea wall as part of the new rossall sea defences project.

What the New Rossall Sea defences could look like

This plan would deprive local beach users, particularly anglers ( including disabled, elderly or young anglers) of a 2km stretch of a the Fylde coastline to fish from, as the rock armour makes it impossible to fish from the promenade at high water.
Anglers come from all over the north west and even from as far as Liverpool, Cumbria and Yorkshire to fish Rossall promenade and contribute to the local economy. It is ironic that a town like Fleetwood, which was built on the fishing industry, is planning to put an end to a traditional and historically important venue for anglers.

I don’t think anyone can argue that the sea wall at Rossall is coming to the end of its useful life and is in need of an upgrade. No one wants to see the sea wall breached and the houses behind the wall flooded out, so we (anglers) are sympathetic to the fears of local residents.
The issue however, is the fact the council are proposing the use of rock armour, which is the cheapest and least desirable option available. There has been an extensive renewal programme of large swathes of the Fylde coast recently, along Blackpool promenade and Cleveleys, with Anchorsholme on the agenda too.
Each of these projects have used schemes which are sympathetic to beach users. They have all used pre-cast concrete steps which dissipate the wave action equally as well as rock armour.

Rock armour is without doubt the cheapest and nastiest option for a sea defence works, particularly for a promenade of a seaside town. Having seen what has happened at Morecambe, the rubbish which collects in the voids each tide is a disgrace. The voids become full of rubbish and have led to an increased infestation of rats, indeed the rock armour is a perfect habitat for them to live and breed.

The engineers have tried to dismiss the potential rat issue by suggesting that the rocks will be fully covered daily by the tide. This obviously won’t be the case, as the rock armour is designed to reach the top of the current sea wall which doesn’t get covered by the tide currently If the rock armour is to be fully covered by tides as they assert, then the Rossall sea defences have been designed ineffectively. The rocks won’t completely cover otherwise it wouldn’t work as a sea defence, a strong westerly gale would crash right over the sea wall and over the promenade rear wall. At Morecambe, the rats just move up to the top of the wall until the tide goes out, and then feast on all the rubbish that gets washed into the rocks from the retreating tide..

Having spoken briefly to the one of the Marine Engineers responsible for the new wall, he admitted to us that the rock armour was chosen purely down to cost. He intimated that concessions could possibly be made for anglers, such as widening the proposed steps at intervals between the armour. He appeared quite adamant that this scheme would be going ahead with the use of rock armour regardless. The council have promised to have a meeting with a delegation of stakeholder angler groups. I am hoping to attend, as is Phill Williams of Fishing, Film & Facts who is an IFCA representative and is equally perturbed at the rock armour proposal.

Well here’s a few pictures from the Morecambe sea defence, taken this week, and you can see why it’s cheap!

Spot the furry residents which thrives in rock armour……

Hardly suitable for a seaside town is it?

A Facebook group has been set up with pictures and comments about the same scheme used in Morecambe, with graphic pictures of the litter problems and vermin associated with rock armour –https://www.facebook.com/groups/507534132615437/

I wonder what the residents directly behind the sea wall feel about the fact that Blackpool have used nice shiny pre-cast concrete steps all the way along the Fylde coast, but Fleetwood have been lumbered with the cheapest option for their new sea wall!

To date, the Inshore Fisheries and Conservation Authority (IFCA) have been informed and have responded, there will be an article in the June edition of Sea Angler (out mid-May). Eric Ollerenshaw MP for Fleetwood has been contacted, and councillor Roger Berry who is cabinet member with responsibility for sea defences at Wyre Council, both are yet to respond.
The Blackpool Gazette ran a front page article, Fleetwood weekly news are also in the process of running an article, both these papers were targeted to get word out to local people. To this end we also leafleted the houses immediately behind the sea wall, informing them of the potential litter and rat problem.
The Angling Trust have also been contacted and have yet to respond.