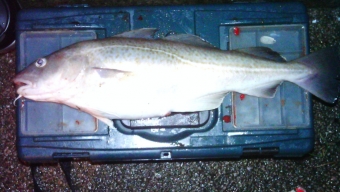 ok as i couldn’t get to liverpool i thought i would try my luck on the north wall thinking it would be the usual pin whiting and dabs.

so got there about half 7 quarter to 8, it was blowing a gale with side ways wind

caught on blow lug
happy i had beat the blank on my first cast i proceded to carry on thinking well it could have been worse might have come and caught bugger all, second cast resulted in another

who said he had a rather nice coddo he said his camera had died, so me being a genorous bloke

wow i thought there here, there on the north wall i was gob smacked thought the wall was shite lol so took a few more for him there is 1 picture of a young lad who was fishing with bait digger who has 2 small codling

anyway i was full of beans and fishing full of anticipation i ran back to my rod and it was a blank,

i got there and caught these little bait robbing fish

i thought i can’t go now there just starting to bite again and its a baby cod (safley returned) there has got to be a bigger one out there so i used the last of my bait on a 1/0 2 hook flapper casted it about 70yards, just as i was rolling a smoke BANG BANG BANG my rod went!1!!!!!!!!! i shit myself gently struck into it YES fish on

”this aint no witing ” , i said praying like the pope at the armeggedon, please land this fish please get up the wall i will go to church every sunday for a WEEK lol, then i landed it my second ever decent cod chuffed to bits i was, did my little cod dance, it spat a load of shrimp out of its gob which i used as bait but to no avail. and a average size chewed up whiting

bait was blow lug, fish wouldfnt entertain black not even the whiting.

i going to bed a happy man tonight