Cod fishing On the Fylde 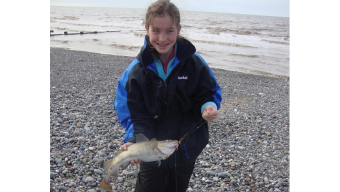 Back in the swing following a lost week when rellies from Aus descended upon us unannounced,I dragged myself from the pit this morning and set off to pump some worms. Then came back home to get the pump which I’d forgotten

All over the place and disorganised as I haven’t had a fortnight without wetting a line for a long time but finally made the beach late and got stuck in.Pumping,for once, was a complete doddle ,worms were throwing themselves on the beach at the sight of the pump,virtually a worm every time in contrast to some recent sessions when its been all I could do to scrape enough blow/skellies/blacks to avoid having to buy any. I managed to pick my way round all the blow and pulled just enough blacks + a few skellies for the session in a few minutes then headed home to see if any of the offspring had crawled forth to come out Cod fishing. Just 1 had surfaced( It WAS before 11am at weekend and theyre teenagers) so we decided to make use of the extra time and sack the plan to fish the Grosvenor or similar neglected Morecambe mark and headed off to Fleetwood.

Arrived at a warm sunny Rossall hospital at 12.15pm to find the beach packed. Apart from the bay immediately in front of the car park,so we set up + spread out there. Looked to be about 15 up toward the point + more still on the School side. By the time we had rods set up there were probably 10 more passed us so we kinda expected a squeeze but chucked in anyway,using the full width of the bay.2 minutes in and before the water had even hit the bottom of the shingle slope my daughter Jess (13 and not afraid to get involved however grotty fishing gets) got a polite little tap tap tap,maybe a doggie messing,more likely a tiny whiting by the insistent little knocks,definitely not a Cod. 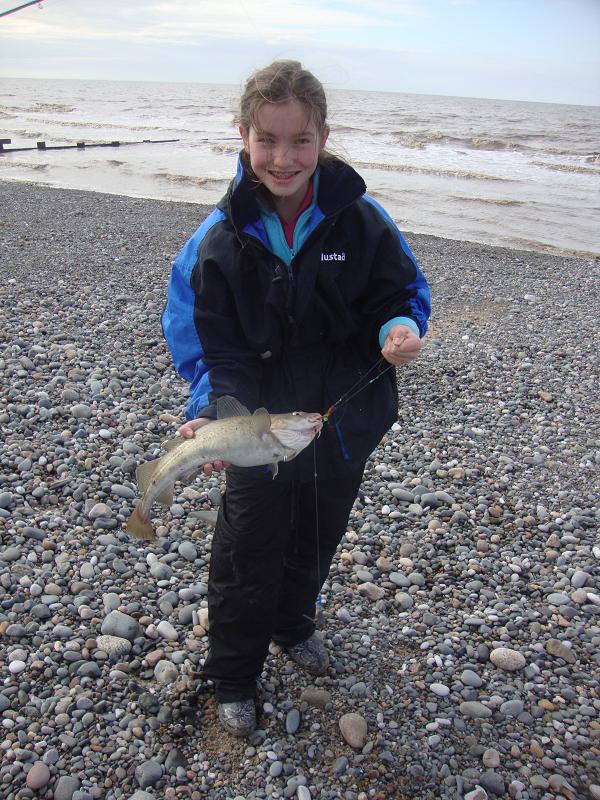 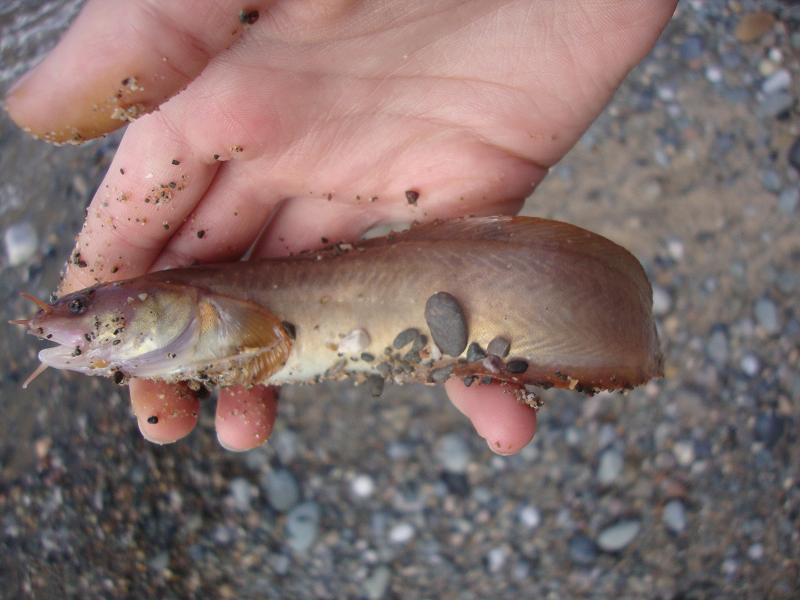 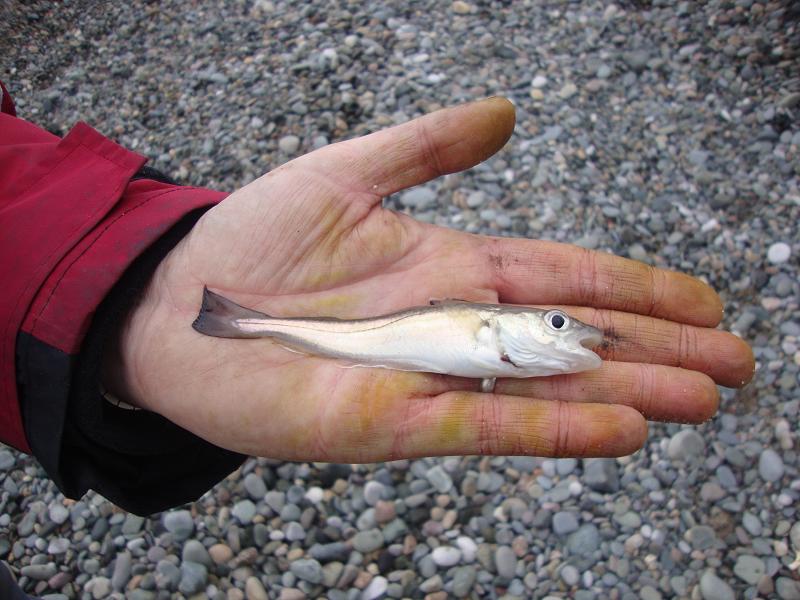 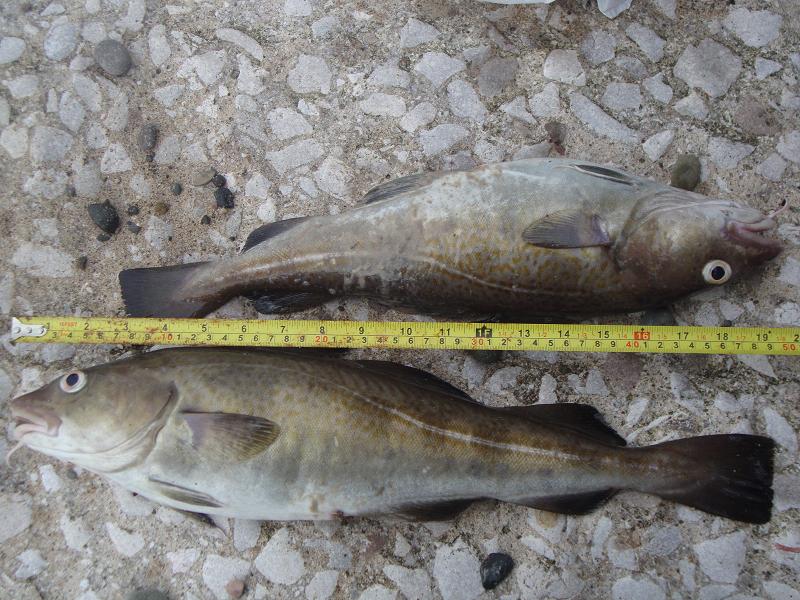 So 10 minutes in we had 4 fish,followed by a few dogs minutes later as fish seemed to move through the swim in nicely ordered species groups 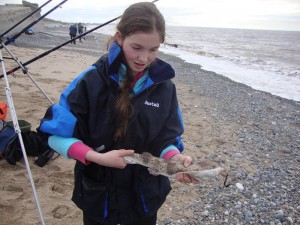 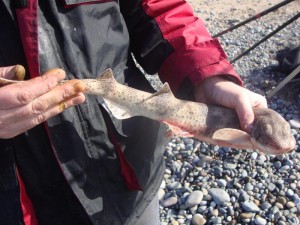 By 12.45 we’d had 11 fish and a very busy start but it was getting unpleasantly packed around us (the fish didn’t help our cause from that point of view!) We soon had 5 of us fishing the one bay,8 rods in all which was a bit stupid and caused more than a few probs as one angler had no grip leads

It then suddenly went as quiet as the grave,not a fish anywhere along the beach for near 3 hours,even a few small boats close in looked to have put the kettle on and feet up. Thankfully after high water a few packed up + cleared off grumbling it was fishing c**p and they shouldn’t have bothered. Jess kept getting the Codling out + displaying them-why not-if you can’t be an insufferable show off at 13 when can you?

It perked up late on,about 2 hours into the ebb and we started taking regular doubles of Whiting,mainly pins but an odd better one 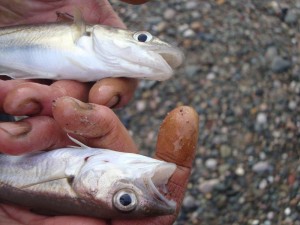 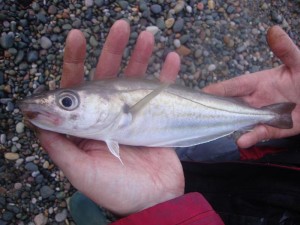 Nothing we wanted to take in light of having a few pounds of Cod fillets in the bag so we just enjoyed an hour’s fun being fooled by 3″ fish that give a bite like Jaws.Shame nothing else sizeable showed up but it’d been a cracking day all round long before that anyway.

We only saw 2 other fish caught around us among a great many anglers,another decent chap who’d apologetically set up in our bay had a decent Whiting late on and was relieved to save the blank but a lot did go off with a duck egg. For once it seemed it might just be that many were a shade short on distance.With a light breeze and bright sunshine it hadn’t looked great on arrival but as always with Rossall there was more water colour and movement than you might expect,nontheless I felt a bit of distance mightn’t hurt to reach deeper water and was casting all our rods as far as possible.Every cast bar an odd one when it slacked off were to maximum range and it paid off.Others casting 60-80 yards were failing just 20 yards to our right + left while we had a steady run so for once it showed having that bit of distance in the locker pays now + again. Now I’m no Danny Moeskops by any means but I enjoy punching it as much as the next guy and to get a few fish on a day most didn’t is always nice. Still keep meaning to get somebody skilled to look over my casting to see if I can’t winkle a few more yards out of it!!!

Anyway,23 fish in the end,14 to me and 9 to Jess~she wouldn’t have cared less if she had only 1~EVERY passer by got a close up of the Codling and she thoroughly enjoyed every moment.
Here’s a thing too-the Cod were caught on Skellies on 3/0 mantas on Pennel Pulley or 2 hook clipped rigs,Blacks/Sprats/mackerel/Peelers and squid were pretty much ignored in favour of the old bog standard lug,only late on did a few Whiting stoop to take blacks. The rest were a waste of time having today.The Codling,on being gutted turned out to be eating nothing but shrimps,stacks of them,their guts were busting with ’em. Must’ve fancied a sweet lug to finish off

Note to self-take shrimps next time.

Most enjoyable all round,the new flask broke though and pi**ed blistering hot coffee all over me-thankfully I’d ignored the wife’s moans that I’d be too hot & I’d worn my neoprene chesties so no physical harm done

Just a quick trivia item: one of the Cod,upon opening,proved to be carrying quite a few gut worms/spaghetti worms,Parasitic nematodes- call ’em what you will. You can often find them in the gut, measuring up to about 4-5cm these are reasonably common things-if you didn’t know what you were looking for you’d probably just take the guts out whole and be none the wiser. Cleaning the fish promptly and thoroughly on the beach if poss prevents them migrating to the flesh when the host dies.
Not generally any harm to humans unless you possess an unfortunate allergy to them,theyre killed off in all forms by normal cooking,usually only uncooked/cold smoking misses ’em.
Have a look next time you get a Cod to take home,bit minging ~NOT in all fish I hasten to add but in more than you might imagine~ but it kinda gives weight to the commonsense mantra many have always preached of cleaning anything you intend to eat as soon as possible-be it Rabbits/Fish/birds etc.
Sorry I haven’t popped pics of them on, I’ve been slapped + chased out of the bin with the camera 3 times attempting it ~before the wife emptied it + took it round the neighbours to put in their bin-with orders NOT to let me root in it. Was just trying to be informative but some people just won’t let you have any fun