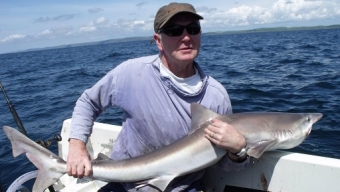 The rig I will be using is this one thats on the charter boats website http://www.onyermarks2.co.uk/the-tackle-2/

It was a Gerry’s staff day out so to speak with myself, Chris and Gerry… I was really looking forward to it as it was my first boat trip ever.

So first job of the day was sorting out some fresh mackerel bait, so off we set to our first mark..

We had to move about a couple of times until we got on top of the fish..after about 30 mins we had enough mackerel for our days tope fishing…

We were now ready for our first mark about a mile out, we were fishing on a sand bank in about 160 feet of water.

It was not long until Chris was into his first fish with a screaming run, after a few minutes of playing the fish all of a sudden no weight, the fish had got off a gutted Chris carried on and rebaited, I was next in and for the first time was hanging onto a fish that actually pulled back a bit…after some guidance from the skipper I was soon getting the hang of playing the fish, it took me about 10 mins to land the Tope but was so chuffed. It weighed around 27lb’s

Was well chuffed with that, amazing looking fish….rebaits and back in eiger to get another…Then gerry was next in chris said to his dad its your turn so grabbed the rod and straight away we knew it was much bigger it continued to strip line from the reel with rod doubled over double, as Gerry was playing his fish the next rod went it was Chris this time more determined than ever to land this one, could we get a double tope on the boat at the same time? after 10-15 mins of playing the fish both were on safely and straight away you could tell Gerrys was a beautiful fish the male weighing about 45lb’s, Chris also got his on the boat safely and his weighed around 20lb’s.

and a pic of gerrys fish in all its glory

The afternoon contiued to deliver runs but no hook ups apart from me catching a couple of bullhuss’s and gerry landing another tope much smaller than his last but still a great looking fish.

It was now time to move to an inward mark as the flood really started to move and the lead required was too big for our light rods.

This is where we would catch the bigger fish if we could find them.

We had been there about 45 mins before the first run on my rod and it screamed off and for what ever reason as i moved the real to strike mode i must have caught the drag so there was no drag, rod bent over double the fish got away, I was gutted but these things happen, few seconds later Gerrys rod bent over double was it the same fish? we will never know as the fish got away again, grr both of us gutted…there was only a few more runs and most fish got off which was highly annoying, we started getting a few dogs in what now seemed dog city.

Although chris did catch this little crab –

The day ended as follows

So all of us were very happy, the evening earlier we visited a mark known as flat rock for an hour with our spinning gear just a couple of mackie caught but it was a great location, although the walk back up the cliff was hard work for me.

The Lighthouse, apparently you can stay there for your hols!!

Walking to the mark.

The view from the top of the cliff.

I would like to thank the guys at onyermarks for a great days fishing, ill defo be back later in the year.

You can also follow my other adventure here on my blog – https://samsfishingreviewsreports.wordpress.com/