Smoothhound from the Boat or Kayak 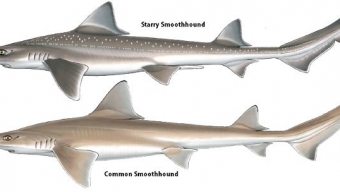 When the conditions fall just right, fishing for Smoothhounds can be one of the most hectic days afloat you can have. In May 2010 I had one of those days on the Kayak where everything went right and the quantity of fish landed was astounding, yet the method of catching them is probably one of the simplest.

Smoothhound are arguably one of the hardest fighting fish in our seas, pound for pound they put up a fight that surpasses even Tope or Bass. It cannot be stressed enough that you must leave your reel in free spool mode with the ratchet on, as smoothies have been known to take rods over the side with their initial screaming runs…

Take a look at this video of a 16lb smoothhound caught aboard Rushys boat Pisces Fisher. The fish never gives up, scrapping all the way to the boat!

Smoothhounds are a pack fish, where you catch one smoothhound you will invariably catch another with 300lb+ catches in a session not uncommon. The bigger fish tend to hunt alone, with the specimen size for the North West being 7lb for both the Common & the Starry. In recent years the number of 7lb+ fish has increased dramatically and a fish of 10lb+ is probably now more realistically classed as a specimen for the NW of the UK.

The first thing you will notice about both smoothhounds is their shark like appearance. Smoothhounds are a genus, Mustelus, of sharks in the family Triakidae. The name of the genus comes from the Latin mustela meaning weasel.

The smoothhound is often confused with small Tope which are of the same family. The easiest way to distinguish between the two is by looking at the teeth. Tope have triangular, pointed shaped teeth, Smoothhounds however have crushing pads, similar to Rays, which are used to crush the hard shells of shore and hermit crabs.

Time of year
The first fish show around April when the first main crab peel begins. This exact time varies from year to year depending on the weather. Smoothounds can be caught right through the summer with odd fish still around until late autumn.

Both the Common and Starry smoothhound are found all round Britain’s coastline. Though the common’s are scarcer north of mid Scotland, the starry smoothhound has been caught as far north as southern Norway. The territory of both species extends as far down into the Mediterranean and North Africa.

Hotspots in the UK are the East Coast as high as The Wash, Thames Estuary, The Hampshire coast, both sides of the Bristol Channel, Anglesey’s northwest corner, along the Fylde coast and Luce Bay in Scotland.

Two marks local to me spring to mind when thinking of smoothhounds. One is a shallow rough ground mark with a medium tide run. The other is a deep sand/shingle channel with sandbanks surrounding it and an extremely fast tide run. Both marks hold smoothhounds however they require different techniques to catch them. Uptiding in the channel and downtiding over the rough ground.

Rigs and technique
Rigs should be kept simple and nothing is more simple than a running ledger. 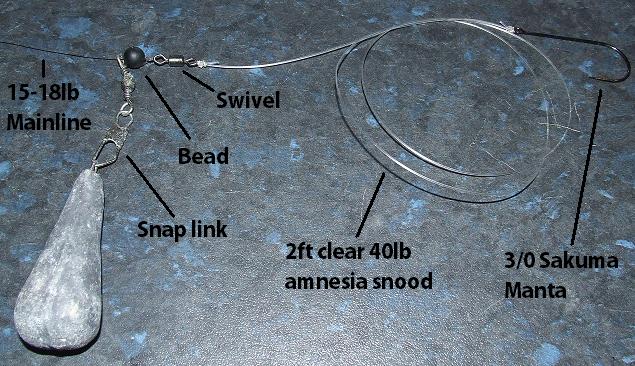 The skin of a smoothhound is very abrasive, almost sandpaper-like, and as such lines should be checked regularly and the addition of a short rubbing leader can be an advantage. In deeper water the addition of a running boom can sometimes help if tangles become an issue.

Downtiding
Baited rigs can either be trotted back in the tide or if there is little tide run gently lobbed out of the back of the boat or Kayak.

Once your rig has settled, keep your reel in free spool with the ratchet on. The first sign of a smoothhound is usually a series of sharp tugs. At this point the fish is thought to attack the bait to first stun or kill its prey. Shortly after these rattles the fish will pick the bait up and run with it, stripping yards of line from your reel. As your reel is in free spool the fish feels very little resistance at this point.

Uptiding
In areas of fast tide run it may be advisable to uptide. This serves two purposes:
1. Much less lead is required to keep your bait on the bottom than downtiding.
2. It places your bait out of the boats scare area, caused by the anchor rope whining in the tid, people moving around on the boat and waves hitting the side of the boat.

The same rig can be used, however a slight alteration sometimes brings more hook ups. Add a foot long length of 60-80lb mono to the rig above between the swivel and mainline, and use a grip lead rather than a plain lead.

The technique of uptiding is quite simple. See the animated image below. 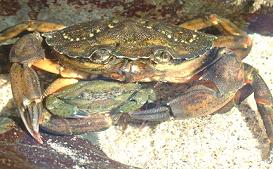 In 1996 a study of the Irish sea showed that 97% of a Starry smoothhounds diet was made up of crustaceans (IE CRABS!)

Whilst it is true that smoothhounds can be caught on a variety of baits, crab is the only bait to consider for serious Smoothhound fishing. GIVE THEM WHAT THEY WANT!!!

Hermit crabs, peelers, softies and crinklies will all be hammered by smoothhound. Sometimes even hardback shore crabs will produce fish. As a back up, squid and razorfish will catch fish if you cannot get crab. 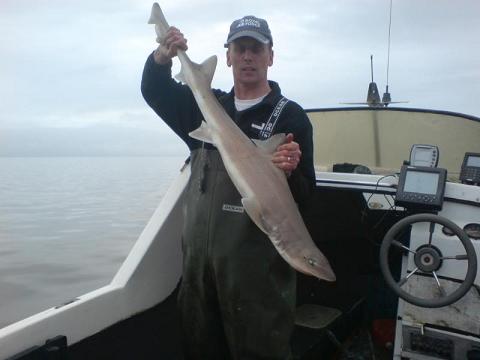 Kayak fishing for smoothhounds
Using the kayak to fish for smoothhounds adds an extra angle. I can assure you, there is nothing quite like being dragged downtide against the anchor by an angry Smut.
A lot of marks are well within a few hundred yards of the low tide line, making them great targets for the Kayak angler, often fishing alongside larger dinghies. 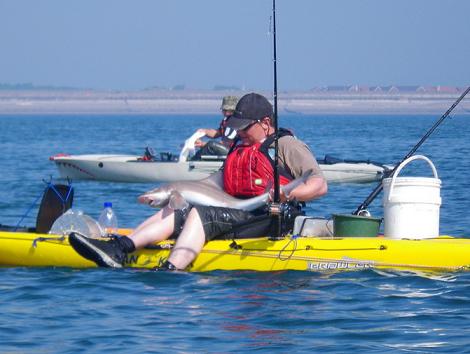