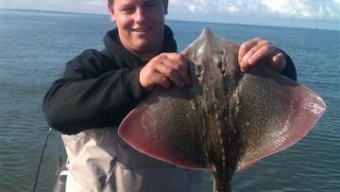 Went out with my old mate John on his boat this morning, hoping for a bass or two. The forecast suggested a nice morning, with wind increasing to around 15mph N-NW around lunch time.

An early start was in order to make the most of the trip, so at 6am i left to pick John up.

We were soon off his moorings and on our way to the first mark of the day.

We were hoping for a bass or two, but plagued by doggies for the first hour or so, a decent Thornback was a welcome break.

John got into them too, suprisingly on blacklug, not a bait you normally would associate with thornies

A steady stream came aboard, with quite a few on worm baits

Another one for me

Nothing massive but quite a few of them….

Then as promised the wind came!!!

We decided to head back into the bay closer to his moorings for a sharp exit should the wind get too bad…… We stopped a mark we have had bass on quite a few times, but unfortunately the wind got the better of us before it had enough water to produce any silvers. I did mange one nice plaice though

A decent session all in all, considering the correctly forecast crap weather…..