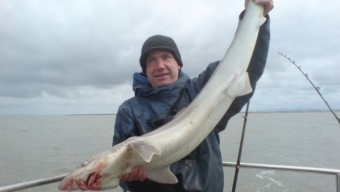 Well, after much planning and preparation the day of the trip thankfully arrived. We’d spent what felt like hundreds of hours collecting thousands of crabs, pumping hundreds of worms and buying up the squid & mackerel stockpiles of several small states for the planned 8 hour trip
The only thing we couldn’t really plan on was the weather and the promised 6mph easterlies, which would have left the sea looking like the proverbial millpond, unfortunately didn’t materialise. Instead the wind forecast had swung round completely to westerly and freshened slightly to 8mph. The skipper of the Blue Mink Andy Bradbury was more than happy to take us out, and we were grateful the trip was still on.

Fresh faced and eager, Myself, Paul, TerryG, Lee, GazzaD, Phill and Ronnie (Buzz) met at the prearranged pick up point on the beach at Fleetwood prom near the lifeboat station….unfortunately for Chris (Smokin), he had to drop out due to an unexpected stroke of good fortune, he had a last minute job interview, fingers crossed it went ok mate

We all had a chuckle at Lee’s tackle box….it certainly explained a few things!

As we sailed down the Wyre estuary, a few anxious glances were thrown at the white horses in the distance over the Lune Deeps. Luckily we were headed in the opposite direction to fish opposite Anchorsholme area, though it soon became apparent that with the wind coming from the west, the sea had taken the chance to build up a large and persistent swell. Not really a problem whilst under way but once at anchor the potential was there for a buffeting, particularly as it would be hitting us side on

At the first stop Andy told us he had caught good smoothhound, tope & bull huss the previous day, so we baited up with a mixture of baits…some opting for crab baits for the smuts, other with mackerel for the tope & huss.
Lee had either misheard Paul’s instructions to bring prawns or thought he’d batter the fish into submission!

After a few dogfish had come aboard, Terry & Ronnie drew first blood with the smuts

And the same pair followed that with another fish apiece….

Terry was on a hot streak and boated another smut, nothing huge but good sport….

Phill could only look on longingly as he had never caught a smoothie even after a few trips on the Mink and he was getting some good natured ribbing from the lads, egged on by the Skipper

Andy proved to be a top skipper, very chatty & informative and only too eager to help out with hints and tips, he was also a dab hand with the brew making. Naturally we gave him a present

Spawny Terry as he was now christened pulled aboard a good Huss, just look at that smug grin….

Gaz was soon amongst the hounds

Soon followed by a spot of Huss wrestling…..

Now Phill had endured watching everyone pulling out smut after smut, even Ronnie had four and he was feeling under the weather with the conditions. Every hound that came aboard was either given to him to return so he knew what one felt like or returned into the water where he was fishing for him to see swim off so it was with some relief that he too got amongst them

Gazza’s reel then proceeded to scream off line and after a good hard tussle he pulled the best fish of the day aboard, a decent Tope…

This mark was proving to be quite productive with all the rods busy with Tope, Huss the inevitable dogfish and smoothies

Then to throw another species into the pot, Myself and Phill managed a small but nicely marked thornback apiece…

Phill got a strange knock on his rod and reeled in to find on the end of his rod quite possibly the catch of the day…..

A tin of sardines in tomato sauce

Blimey, what are the odds of that?” he said…….oh about 6-1 came the reply in unison

Andy had kept an eye on the weather forecast updates, and he informed us that the forecast had changed yet again since we set sail and instead of lessening the wind had increased to 14 mph s’westerly. He assured us as long as the swells weren’t breaching, we were perfectly safe, as indeed it proved

After a morning being battered about by the Irish Sea swells (it was a constant battle just to try and stand still! ) and after reeling in a good number of hard fighting Smoothhound, Tope and Bull Huss it was perhaps understandable that the trip back was a little subdued

Once back on dry land it was time to confess to Phill that I had clipped the tin of sardines to his line and slid it down, under instructions from Mein Fuhrer Calvert

Good sport that he is, Phill saw the funny side and posed with the ‘Catch of the Day’

All in all, considering the weather turned a bit snottier than we would have liked, the fishing was good, the banter top notch as usual and the boat and skipper first class.
For the record, there was three spewers, Ronnie went first early doors but battled on gamely to the end, then me and, after copping some ‘spray’ in his chops from me

Lee succumbed too! Fairplay though, we all carried on fishing and catching and didn’t let it spoil the day I think most people on board felt it a bit during the day to varying degrees, apart from Paul who has seawater running through his veins

When’s the next trip?