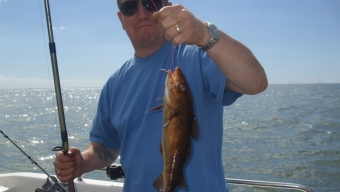 Well eventually the weather forecast was good, and no work commitments ,managed to get out, and get the boat wet .

Decided with the forecast, that a trip to barrow was a good option.

we were looking forward to trying the boat, as we had just fitted some hydrofoils. as i wasn’t quite happy with how long it took to get on the plain. With the first push on the throttle I was impressed, it lifts out like a cork now, well worth £17

arrived at barrow to a lovely calm see around 9:30

to find up yours (Gaz young) and Ross. pulled along side for a chat, they told us they had a coddling and a ling, so hopes were high

dropped the pin, first knock I had a codling

hopes were really high now, as dad had a decent codling on, only to part with it just under the surface

This was the second edible crab I had, looks like this one had a scrap with something tough

but not quite sure (anyone help us out on that)

Then a little wrasse for me

not sure, might be a shanny of some sort?

Unfortunately no more coddling caught at this mark, although Ross caught a small pollack .

So we decided on a move closer in shore.

found this to be quite snaggy with lots of kelp, which I presume, this is why,this codling is a reddy colour ??

so with beautiful flat calm sea, and the engine and sounder (that’s another story) running and working a treat, we decided to have a roam about searching for new marks and interesting features, this proved to be very positive

for the last hour of the flood we headed to mark number 3, only managed dogs and whiting.

another fantastic day, with the plotter, having a few new marks added, a few fish to boot, and for once i actually beat Dad on species and numbers of fish,

roll on next time