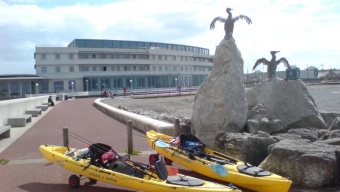 Myself and Paul pondered about heading down to Blackpool with the kayaks to see if there were any thornbacks about or early smoothhound. After a bit of head scratching we decided we couldn’t be bothered with the drive so made the choice to stay local and try after the plaice in Morecambe. Plaice fishing in Morecambe has already got off to a good start, so hopes were high of some Decent Plaice.

Low water was 11.30am-ish so we plumped for a lie in and a leisurely launch around low water in readiness for the flood. We dragged our yaks down the hardcore path that runs down the side of the stone jetty to the shrimp boat moorings and prepped them prior to launch

The forecast was as expected, light easterly winds and blazing sunshine,superb weather for a bit of spotty bashing

We got on the water just as the flood started so it was with minimal effort that we paddled down to our chosen destination. Paul was in first drop with a small flounder…..

We were fishing with frozen black, which seems to be the top bait for plaice in Morecambe bay, along with blow lug and thin strips of squid. Two hook flowing traces with 2/0 fine wire aberdeens and Jagsy’s salmon egg beads.

It was a fish a drop, with quite often double headers coming out

Unfortunately we’d only just anchored up after our move when without warning, the weather took a quick turn for the worst with the winds swinging round northerly and freshening markedly. It was hard to believe that only a few minutes separated these pictures…

We decided to head back as we weren’t sure whether it would get worse, and the sea had got pretty sloppy. As I reeled in prior to upping anchor I pulled in a decent fish which vindicated our move, pity we couldn’t hang around to get a few more

Sod’s law or Friday the 13th, take your pick, by the time we’d negotiated our way back, the wind began to die down and the sun came out again, so we opted to fish on and drop anchor near the shrimp boats as one had just come back in and had dumped his bycatch and riddlings over the side…

It proved fruitless, with only pin whiting coming aboard