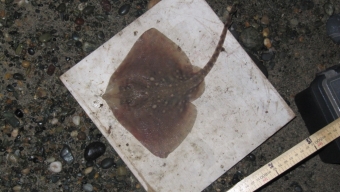 I arrived in Cemaes bay Anglesey yesterday afternoon, for a weeks holiday at my mums with the boys. After persuading my mum to look after the boys in the evening,

I popped over to Amlwch to get some bait from Telboys tackle. After dinner I went over to Cemlyn Beach which is on the North of the island about three miles west of Cemaes Bay. I arrived at the beach at 8.00pm, just as the sun was setting and set up two rods, one with a one up one down rig with rag and the other a pulley pennel with frozen black tipped with squid. Low water was at about midnight.

From the first cast I was getting good knocks, but failed to connect until about an hour in my pennel rod started bouncing and I landed a doggie – blank avoided

Next there was a good knock on my other rod and I reeled in my first ever ray – a thornback of about a pound and a half.

Then it went a bit crazy, I had a small whiting and then a small codling

Followed by a whiting double

And more whiting and doggies.
I finished at 2.00am with 2 rays, a codling, a pouting, 9 doggies and 14 whiting.
I have never fished this beach before even though I lived only a couple of miles away for 18 years, I will certainly go back later this week. All baits caught fish, but rag was the best bait. I am going to try to get some peeler, because this is supposed to be a good spot for bass and plaice.