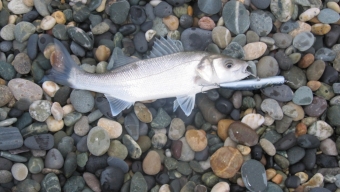 Since the last report I have had four more sessions at Cemlyn with varied results.

Monday 2/4/2012 – fished 8.00pm till 2.00am weather was fairly calm and cold. But there was a bit of swell. I arrived just after high tide and decided to try plugging of the beach to start with. I had a wander along the beach and caught this little bass – first of the year and my first ever on a lure..

As darkness fell I set up my ledger rods using a variety of baits – rag, sandeel, mackerel black lug and squid. Rag was once again the best bait but all except mackerel caught. However, tonight it was just dogs and whiting. Getting a bit board of this I decided to have a go at floatfishing, Cemlyn is a steeply sloping pebble beach. I had bought a float that I can put a glow stick in for £1.00 at a car boot sale on Sunday so I gave it a go. After half an hour or so another first for me –

Dogfish on float, again it was rag that did the business. Left at 2.00am with frost on car.

Wednesday 4/4/12 – the day started off blowing a gale and sleeting. I was unsure where to fish because there were galeforce winds blowing straight in to cemlyn. I left my mums at 7.30pm and headed to Point lynas – too windy and rough so I headed to the Menai straits (Moel why Don) which was sure to be sheltered – Oh no it wasn’t!! So off to Treaddur bay bingo nice and sheltered so headed to Porth Dafarch and fished there. After an hour of so (it was now 10:00pm) I realised that the beach was extremely shallow and I was only fishing in an foot or so of water. By now the wind had dropped to only a strong wind so I headed for Cemlyn – having travelled round the world to get there (well Anglesey at least). However, glad I went to cemlyn as I had a couple bore bass and missed a few cracking bites. The surf was up and cemlyn fished well

Thursday 5/4/12 AM – Took Nick to Cemlyn to fish the morning high tide with a bit of left over bait I had. The wind had dropped a lot and bites were few and far between. I took some pics of Cemlyn, which would be an excellent beach for a match, there is plenty of room and similar ground right along the main beach.

Nick did a bit of plugging but to no avail,

I avoided a blank with this little flounder.

Thursday PM – Wind had dropped completely so headed to Llaneilian to fish of the rocks. Plenty of bites and caught 6 dogfish and 5 whiting between 8:00pm and 10:30pm. Getting fed up with dogfish and whiting, I decided to move on to …..thats right Cemlyn – what a waste of time!! It was flat calm, even the waves could hardly manage to lap on the shore. There were three others fishing on the beach, and no one including myself even had a bite. Packed up at 2:00pm and home to bed.