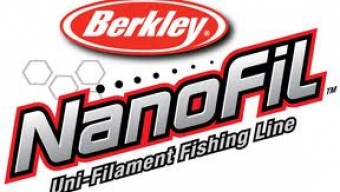 So you may have heard about a new line that is said to be the biggest development in line manufacture since braid. We thought Nanofil was that good it needed a review!!
Nanofil is made by Berkley, and is neither a braid nor a mono line. The name actually comes from Nano-filament – Essentially it is a nylon fishing line but instead of being a single strand of nylon (mono) it is many minute strands, molecularly fused together.

This gives the line very similar properties to braid – with one major difference. The smoothness and feel is virtually the same as monofilament, giving long smooth casts with virtually no friction.

Heres one of the promotion videos from Berkley – Note: Nanofil is now available in various breaking strains up to around 30lb, with 35lb and 50lb being available in the new year.

12 times less stretch than mono?!
One thing I was surprised at was the serious lack of stretch. Tying a loop over a door handle with a 3 metre length of Nanofil I decided to put it to the test. Over the 3m length there was virtually zero stretch at all. Extending the pull test to around 6m resulted in less than an inch stretch. I repeated the pull test with some similar poundage monofilament and found over 3m and 6m it produced around 6inchs and almost a foot of stretch respectively. Ratio wise around 12 times less stretch than mono!! Tying Knots
Tying knots with Nanofil is a lot easier than with braid. Braid can sometimes be a little fiddly with loops collapsing at the crucial moment. Nanofil feels more like a mono to the touch and forms a nice loop. I suppose you could say Nanofil is a lot less supple than braid, although I personally see this as a positive characteristic. Knots slide effortlessly into place with a little lubrication.

Abrasion resistance
Here Nanofil is very similar to braid. The line will fray when abraded. Whilst some “threads” may be damaged the rest of the line is left completely intact, meaning that if half the line is damaged the strength would maintain half its strength. A nick half way through mono will likely result in the overall strength of the line being reduced by much more than half.

Field Test
I was going to give nanofil a try for plugging, or even boat work, but to tell you the truth this line has already proved itself in the lure fishing arena, with many of the pro bass anglers in the USA now using it – If its good enough for them, its good enough for me!!

I decided to give it a go on my beachcasting gear. One main reason for not using braid on my multipliers in the past was the worry of a birdsnest with it. Even the smallest of fluffs can be a real pain to get out with braid. Nanofil is much more similar to mono in its feel and suppleness, so i thought it might be ok…

I fished a full session a couple of nights ago with it and i have to say I loved it!! Bite detection as you would expect is amazing, with the slightest little knock showing up, even at distance.

Casting was smooth and with its super low diameter it certainly felt like i was casting a little further than usual.

I also tried to purposely over run the reel a few times to see how easily it would come out. As i expected it was very similar to mono, and a little fiddling with the Thumb against spool trick and it was out.

One thing that did take a little getting used to was not tightened up to the lead as much as you would with mono. If you tighten up to the lead the action of the waves will pull your lead free. Leaving a little slack line soon combated this though. Review Conclusion
I personally see Nanofil as a direct replacement for braid situations. Spinning and plugging is probably its ideal use. Casting small lures much further due to the smoothness of the line.

I can also see the boat and kayak guys loving this line. In the past braid has been frowned upon on charter boats due to its tendency to slice through other peoples lines if they are using monos. Switching to Nanofil should eliminate this problem completely. Worn rod rings have been a problem with continued use of braid, this should also be a thing of the past.

The only slight downside being the price. At £35 per 270m spool it is perhaps a little expensive. Having said that, if you compare it to some of the braids available and it falls in the upper middle of the price range.