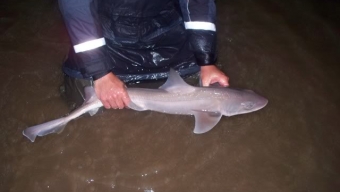 After hearing a report about the odd smut coming off the beach down on the flyde coast,

I met up with Andy Nuttall that had arrived at the same time, so we got our gear sorted and made off down the the beach, Crabs at the ready, This was going to be my first ever trip for a smut off the beach so i wasnt holding out much hope for myself Andy picked us a nice little spot to the left of the others fishing just by a small channel, After 15 mins of being there we heard the famous words off one of the lads,I am in , He was pumping his rod hard lol , Two mins later, Andy had one, It was a good fish which wouldnt hold still for him

Then it was my turn for a slack liner, Just kept reeling felt the weight, a head jiggle and then nothing, Bollox, think ive lost it i said, Just keep reeling it in i heard Andy saying, He was right, when it got nearer the beach, they kick into life swimming uptide in the surf, Top stuff, Not big but my first smut off the beach, Well happy , Andy expertly tailed it and i got my photo

,
Andy ended up with 3 smuts

I ended up with 2 and a big smiley face, Cheers Andy for the invite and thanks for helping me get my fish
A better second fish for me

A good sign that summer is on its way, Big jelly fish