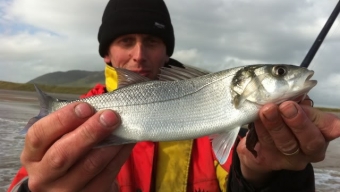 The three amigos were set on another Cumbria session yesterday, with Silecroft the provisional destination as we set off, though other venues were bandied about including Drigg & Seascale. What swung it towards Siley was we arranged to meet Lee at the start of the flood with Gazza D promising a show too.

On the journey up we half decided to press on and fish Drigg on the flood, but then we stopped for fuel which was next to a cracking Fish & chip shop…..so it was a leisurely chippy tea instead!

We pressed on to Silecroft were we hoped to get to just before low water. The tide was tiny and in hindsight we should have ignored our rumbling tums and pressed on further up the coast, but Silecroft it was…

On arrival the sea looked great, good surf and a bit more colour to it than last week

We were soon set up and waded out into to surf and launched out our baits.

We had frozen worm, a few fresh crab, frozen crab, sandeel, and a few razors with us

Dave waiting for a bite

And a few minutes later a nice little schoolie

Which results in a small but perfectly formed Schoolie (just like him!!)

Rushy with a School Bass (They were all very clean fish…)

Terry eagle eyed in the hope of a bite

Its a lovely spot, beautiful scenery!!

Just as the flooding tide hit the shingle Lee turned up to fish over high water with us… I dont know why everyone says he is a knobhead, he seemed alright to me ;o)

Once the sun started to go down the weather took a turn for the worse, and it felt more like November rather than nearly June! the sea looked spot on though

Terry got amongst them too

All in all it was a cracking session with good company and decent fishing, we were kept busy with constant bites from bass, only schoolies but good fun nonetheless.

Roll on the next trip