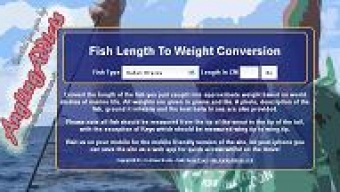 So, the story starts about 18 months ago. I was out on my kayak fishing for smoothhound off Cleveleys…. I was on the phone to one of the lads (either Terry or Rushy cant remember, probably Terry, he has a habit of calling whilst you are fishing!!!) and he asked what size the smoothhounds we had caught were…. I replied that i didnt know but maybe around 10lb. There was a bit of piss taking about the size of one another’s smoothhounds amongst the other kayakers and an extremely nearby dinghy!!

It dawned on me that whilst fishing on a kayak its virtually impossible to weigh a fish, particularly something as big as a smoothhound. I set about trying to find a conversion chart to be able to measure a smoothhounds length, and convert it into a rough weight…. I found very little, and quickly gave up….

The issue raised its head again more recently after a shore trip where we had caught smoothhounds but no one had any scales with them…Again i searched for a chart but found nothing!!

Well….. i actually created a basic working model of a fish weight to length program for smoothhound and bass to put on our site…..but felt there was more that could be done. I came across a few stumbling blocks at this point…. It was time to bring in the big guns!!!!!!

Luckily for us Lee is the man to talk to on these things….I didnt realise quite how good he was until this point!!

My basic program evolved very quickly into a much more complicated and involved website. Literally within hours Lee had the basis of a working site, but all together this took him around three days solid to be fully coded (plus my constant nagging on different things ever since then )

Massive, MASSIVE thanks to Lee for the work he has put in on this!!!!

So, after alot of work over the last couple of weeks…. from myself and Lee

Its simple to use, just select the species, input the length to get the estimated weight, plus info on that species!!! It currently has 23 species but we will be adding a few more over time.

There is also a mobile version, so you can check your fishes weight out on the beach!!!

If any of you guys find any inaccuracies in using the site, or have any feedback or suggestions, please let us know….we may need to tweak some of the info as we go, but in the main the converter should be as accurate as is possible. Obviously every fish is different, some are fat some are skinny, but our converter should be somewhere in the middle!!

Current species included in the Length to weight converter are :