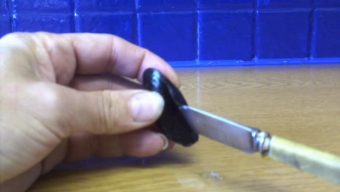 Here’s the method I use to open and prepare mussels for bait. I know people advocate the easier method of pouring boiling water over the mussels until they open, then dunk them in cold water to stop them cooking further….but I feel this method presents them in their most natural state.

Tools for the job

Essential…..dont use a sharp knife!!

I use a cut down ‘butter’ knife, you can find them on car boots or at the back of your mum’s cutlery drawer

I find these good to use because the metal of the blade is thinner than modern cutlery, so it’s easier to slide into the mussel shell.
The blade of the knife was quite long so for ease, I’ve cut it shorter and rounded off the end. Basically, any blunt ended knife will do the trick….

So if you look at the mussel in this picture, you open it on the right hand side (the flat side), where the “beard” of the mussel comes out of the shell. This is the natural weak spot, as it has to allow the strands of the beard between the two halves of the shell to attach itself to whatever…….. So that’s where you slide your knife. There’s no need for brute force, wiggle the knife edge around and apply gentle pressure and you’ll feel the blade slide between the two halves….

Once in, slide the blade up towards the rounded end of the mussel……… This is where the ‘muscle’ of the mussel is situated. Once you’ve cut through this, the shell comes apart easily. It’s the round white bit next to the knife……

You then end up with this……

And occasionally, a few of these…

Tiny crabs that live inside the mussels, presumably eating them from the inside out? Don’t know if they’re a particular species, or just shore crabs that have been ingested as larvae and grown inside :think: the shells of the crab seem to have been smoothed over by the mussel, like a pearl!!

Next, get a skewer, I use a bbq metal one but a wooden one or even a knitting needle would do. Slide the meat of the mussels onto the skewer like so…..

And you’ll end up with this……lovely!!

Next you get your trusty elasticated thread, I prefer ‘Ghost cocoon’ thread, the thin stuff…..and whip it to an inch of it’s life!!

Give it a good going over with the thread, backwards and forwards loads, catching all the dangly bits and consolidate the whole thing into a ‘sausage’, so that it stays in one piece when you slide it off the skewer…

And you should end up with this…..

When you use it, you can cut it into suitable size pieces, but I always use extra thread to whip it onto your hooks

A superb bait for tipping off or bulking up existing baits.
I think crab and mussel c0cktails and mussel and black lug c0cktails are deadly for coddies.
The more mussels you shell, the easier it becomes….practice makes perfect! I believe freezing the mussels & defrosting in their shells prior to preparing them makes them easier to open.
It’s a much under used and underrated bait. Find a source on a beach near you, it’s free, easy to collect, simple to prepare and freezes well so you can always have a supply readily available for those ‘unplanned’ trips.