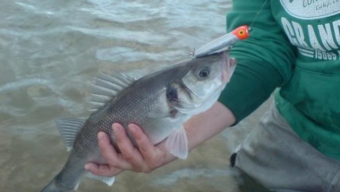 Got a text from Rushy about a session with the plugs, the weather was looking reasonable and with there being a few whiting about we felt confident that an odd bass might be around to snaffle our surface lures.

On arrival the sea was really quite still and so i opted for a smaller 110mm sidewinder chug bug look alike, and dave decided on his old faithful chugbug.

The first fish fell to me on the smaller sidewinder, i think these smaller poppers work better when the water is calm, being a little more subtle. Maybe its all in my head but i feel more confident somehow.

A little while passed and another fish fell to the smaller lure, this fish got a little niging

By this point Dave was chomping at the bit and headed over to poach my spot.
This tactic paid off and he caught two small schoolies in quick succession to level the tally.

We were chatting away next to each other when a much bigger fish took my small sidewinder, i felt the fish and a split second later it was gone…. Bloody fishing!!!!

Dave was next into a fish, and it was a better size by the look of the bend in his rod…. this turned out to be a fish of around 4lb

Persistence paid off and i had a slightly better fish maybe 2.5lb

We both were getting fish chase and follow our lures, swirls behind the plug… which was frustrating at times, but also quite exciting.

The wind picked up and a slight chop formed. Here Daves larger chug bug came into its own, being that bit bigger and much noisier standing out amongst the disturbance. My worst fears were realised and he managed to hook and land another schoolie to add to his score. I really should have switched to a larger plug but by now we were getting chilly, and leaking waders (a thorn in every pluggers side) meant a retreat just after dusk.

Final scores, Dave 4, me 3. Plus we both had lots of missed takes, and i pricked two other fish.

All in all a great session considering the water was quite so coloured. I guess when these fish are hungry, other senses come into play and instincts take over. Looking forward to the next session!!! Which might be over the weekend if the Whitby wrecking trip gets canceled.