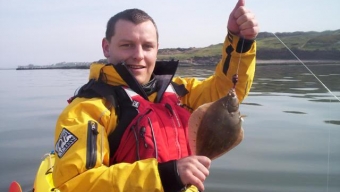 I half intended going out on the Kayak after work on friday as the weather was so good, but a phone call from Terry later and it was decided that a longer trip on Saturday would be better, so it was arranged that Terry would be at mine for 730am ish the next morning…

Unfortunately i thought he meant 730PM, and so stayed in bed Saturday morning….  Ok i slept through the alarm  (sorry mate!!!)

Anyway we eventually got out there after first bumping into Martin Summers, then Colin came down the beach to say hello….. think it was around high water (10am ish) by the time we actually got on the water…

The next bit please dont read if you are called “anyone” Cos if you read it Terry wont be happy with me, ive promised not to tell you

Two minutes out on the water, i heard a splash!!!!

But no…. just he had lost MY ROD over the side out of the rod holder….

So then he had to use my spinning rod for a little while until the tide dropped enough to retrieve it!!!!

Anyway, we did eventually manage to have a little bit of a fish out from throbshire ish, quite a few Plaice are now showing, and considering we missed the flood we did ok with maybe 10 Plaice and a flounder between us.

Once the tide had dropped right off the beach we moved a few hundred yards further out, back into a little deeper water. But here all we could manage was Dabs.

Got there in the end, not a bad little session really and came home with red faces!!!

Another couple of weeks and itll be Smoothies off Rossall!!!!